Who you gonna’ serve?

Many people are slaves to sin and self.

What will it be?

We have a choice.

A slave to sin or obedient servant to the Master?

For when you were slaves of sin, you were free in regard to righteousness. Therefore what benefit were you then deriving from the things of which you are now ashamed? For the outcome of those things is death. But now having been freed from sin and enslaved to God, you derive your benefit, resulting in sanctification, and the outcome, eternal life. For the wages of sin is death, but the free gift of God is eternal life in Christ Jesus our Lord (Romans 6:16-23 NASB).” 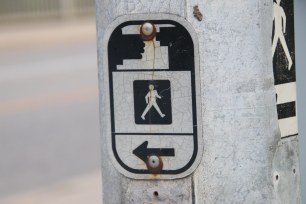 At intersections… before crossing, stop-look & listen.

At train-tracks… before crossing, stop-look & listen.

Crossing over into new adventures… before crossing, stop-look & listen.

“Then Moses went and spoke these words to all Israel. And he said to them: ‘I am one hundred and twenty years old today. I can no longer go out and come in. Also the Lord has said to me, ‘You shall not cross over this Jordan.’ The Lord your God Himself crosses over before you; He will destroy these nations from before you, and you shall dispossess them. Joshua himself crosses over before you, just as the Lord has said (Deuteronomy 31:1-3 NKJV).”

He crosses before you.

“And the Lord, He is the One who goes before you. He will be with you, He will not leave you nor forsake you; do not fear nor be dismayed (Deuteronomy 31:8 NKJV).”