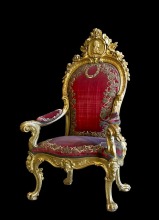 The King has come…

“Now after Jesus was born in Bethlehem of Judea in the days of Herod the king, behold, wise men from the East came to Jerusalem, saying, ‘Where is He who has been born King of the Jews? For we have seen His star in the East and have come to worship Him (Matthew 2:1-2 NKJ).”

Your King is coming…

“Rejoice greatly, O daughter of Zion!
Shout, O daughter of Jerusalem!
Behold, your King is coming to you;
He is just and having salvation,
Lowly and riding on a donkey,
A colt, the foal of a donkey.”
(Zechariah 9:9 NKJ)

He rules over a spiritual kingdom…

The King ‘is’ coming!
“He who testifies to these things says, ‘Surely I am coming quickly.’ Amen. Even so, come, Lord Jesus (Revelation 22:20 NKJ).”