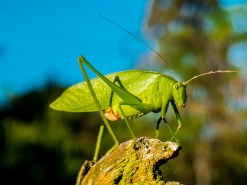 I assume you are familiar with the children’s  Itsy-Bitsy Spider sing along.

In the Old Testament book of Numbers, we find whining Hebrew spies. Faithless, they felt like itsy-bitsy-grasshoppers.

“There also we saw the Nephilim (the sons of Anak are part of the Nephilim); and we became like grasshoppers in our own sight, and so we were in their sight. (Numbers 13:33 NAS).”

They saw themselves as insignificant and powerless. Likewise, the giants in the land saw them as spineless invaders they would crush under their heels.

In contrast, Caleb had seen God’s children through eyes of courage and faith.

“Then Caleb quieted the people before Moses and said, ‘We should by all means go up and take possession of it, for we will surely overcome it (Numbers 13:30 NAS).”

2 thoughts on “Under Their Heels!”