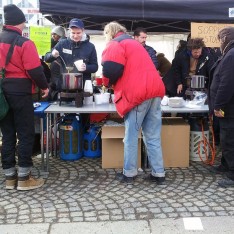 Prepare for the worst.

Prepare for changes in the economy.

At times America is blessed with a ‘chicken in every pot.’

Yet; in economic downturns and depressions many have taken handouts at soup kitchens.

“I have been young and now I am old,
yet I have not seen the righteous abandoned
or his children begging for bread (Psalm 37:25 HCSB).”