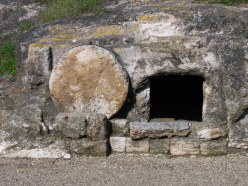 “Men of Israel, listen to these words: Jesus the Nazarene, a man attested to you by God with miracles and wonders and signs which God performed through Him in your midst,  just as you yourselves know— this Man, delivered over by the predetermined plan and foreknowledge of God, you nailed to a cross by the hands of godless men and put Him to death. But God raised Him up again, putting an end to the agony of death, since it was impossible for Him to be held in its power (Acts 2:22-24 NASB).”

“and as the women were terrified and bowed their faces to the ground, the men said to them, ‘Why do you seek the living One among the dead?  He is not here, but He has risen. Remember how He spoke to you while He was still in Galilee,  saying that the Son of Man must be delivered into the hands of sinful men, and be crucified, and the third day rise again (Luke 24:5-7 NASB).”