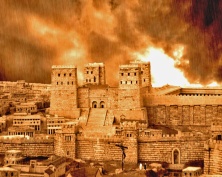 Solomon had his first major encounter with God.

“In that night God appeared to Solomon and said to him, ‘Ask what I shall give you.’

The 2nd time around…

“Now it came about when Solomon had finished building the house of the Lord, and the king’s house, and all that Solomon desired to do, that the Lord appeared to Solomon a second time, as He had appeared to him at Gibeon. The Lord said to him, ‘I have heard your prayer and your supplication, which you have made before Me; I have consecrated this house which you have built by putting My name there forever, and My eyes and My heart will be there perpetually. As for you, if you will walk before Me as your father David walked, in integrity of heart and uprightness, doing according to all that I have commanded you and will keep My statutes and My ordinances, then I will establish the throne of your kingdom over Israel forever, just as I promised to your father David, saying, You shall not lack a man on the throne of Israel.’

‘But if you or your sons indeed turn away from following Me, and do not keep My commandments and My statutes which I have set before you, and go and serve other gods and worship them, then I will cut off Israel from the land which I have given them, and the house which I have consecrated for My name, I will cast out of My sight. So Israel will become a proverb and a byword among all peoples. And this house will become a heap of ruins; everyone who passes by will be astonished and hiss and say, ‘Why has the Lord done thus to this land and to this house?’ And they will say, ‘Because they forsook the Lord their God, who brought their fathers out of the land of Egypt, and adopted other gods and worshiped them and served them, therefore the Lord has brought all this adversity on them (1 Kings 9:1-9 NASB).”